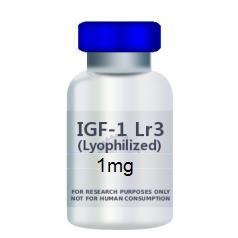 picture is for illustration only, we ship unlabeled vials

IGF1 LR3 also known as Long R3 IGF-1 or Insulin-Like Growth Factor-I LR3 is a Human Recombinant, single, non-glycosylated, polypeptide chain containing 83 amino acids and having a molecular mass of 9200 Daltons. IGF1 mediates many of the growth-promoting effects of growth hormone (GH; MIM 139250). Early studies showed that growth hormone did not directly stimulate the incorporation of sulfate into cartilage, but rather acted through a serum factor, termed ‘sulfation factor,’ which later became known as ‘somatomedin’.

For RESEARCH PURPOSES ONLY.

IGF-1 LR3 is the primary protein involved in responses of cells to growth hormone (GH): that is, IGF-I is produced in response to GH and then induces cellular activities. One such example is muscle growth or hyperplasia. This compound also makes the human body more sensitive to insulin. It is the most potent growth factor found in the human body. IGF-1 causes muscle cell hyperplasia, which is an actual splitting and forming of new muscle cells.

The most effective form of IGF-1 is Long-R3 IGF-1. This formula has been chemically altered to avoid binding to proteins in the human body, and to increase the half life, approximately 20-30 hours.

The polypeptide Long R3 Insulin-like Growth Factor-I IGF-1 LR3) is an 83 amino acid analog of IGF-I actually comprising the complete IGF-1 sequence but with the substitution of an Arginine (Arg) for the Glutamic Acid (Glu) at position 3, as well as a 13 amino acid extension peptide. This sequence change causes IGF-1 to avoid binding to proteins and allow it to have a much longer half life, around 20-30 hours. This analog of IGF-1 has been produced with the purpose of increasing the biological activity of the IGF peptide.” IGF stands for insulin-like growth factor. Among the effects the most positive are increased amino acid transport to cells, increased glucose transport, increased protein synthesis, and decreased protein degradation. When IGF is active it behaves differently in different types of tissues. In muscle cells proteins and associated cell components are stimulated. Protein synthesis is increased along with amino acid absorption. As a source of energy, IGF mobilizes fat for use as energy in adipose tissue. In lean tissue, IGF prevents insulin from transporting glucose across cell membranes. As a result the cells have to switch to burning off fat as a source of energy. IGF-1 builds new muscle tissue by promoting nitrogen retention and protein synthesis. This causes the growth of muscles through both hyperplasia (which is an increase in number of muscle cells) and mitogenesis (which is the actual growth of new muscle fibers). Thus IGF-1 not only makes muscle fibers bigger, it makes more of them as well.

Recombinant Human Long-Arg3-Insulin-like Growth Factor-I IGF-1 Long R3 (IGF1-LR3) is a synthetic analog of the naturally existing insulin growth factor (IGF) which is a 93 amino acid residue. Modifications of the natural form occurred with the substitution of the Arg with Glu at the position 3, giving a code R3, and also an extension of a 13 amino acid at the B-terminus. Just like the IGF-1, R3 has been shown to induce the development and growth of cells.

The studies on transgenic and knockout mice have shown that it can control its development and growth. It plays an important role as regulator in the G1 to S phase of the cell cycle. When applied to cardiomyocyte cultures, R3 have shown a large increase in proliferating cell nuclear antigen expression and in several cyclins involved in cell progression as well as in bromodeoxyuridien (BrdU) labeling (Kajstura et al. 1994). Other effects it has on cell lines are increased cell survival, inhibition of the apoptotic pathways, culture longevity and increased recombination of protein production (Fang et al. 1997). In another study, the application of the LR3 IGF-1 has led to an increase in the myocyte bromodeoxyuridine uptake by three to fivefold. But it has also shown that IGF-1 LR3 actions have been blocked by the ERK and P13K labeling which completely abolished the BrdU uptake. Furthermore, ut has been shown that in mycocytes, IGF-1 R3 stimulates the cardiomyocyte division in vivo (Sundgren et al. 2003). It has also been suggested that IGF-1-Long 3R is more potent than the IGF-1 because of its low binding capacity with all known IGF binding proteins (Tomas et al. 1995). In another investigation, feeding of LR3-IGF-1 in different amounts to investigate the effects on somatotropic axis (plasma levels of IGF-1 and 2, IGFBPs) was done. They have reported that plasma Long-R3 increased when administered subcutaneously but with no such behavior when administered orally. Furthermore, LR3 lowered the levels of native IGF-1 in rbGH-injected in calves, but L-R3 increased the amounts of IGF-II concentrations when administered with L-R3 subcutaneously. The parenteral administration of the Long R3 IGF-1 decreased the growth hormone concentration but did not affect the secretory system. It was also reported that the somatotrophic acis is basically functioning in neonatal calves and can be influenced by nutrition, growth hormone and Long-R3-IGF-1 (IGF1-LR3). (Hammon and Blum 1997).

IGF-1 is a peptide roughly the same structure and size as insulin, or about 70 amino acids long. It belongs to the peptide family of substances identified as growth factors. It is a hormone released in the liver as well as in peripheral tissues such as skeletal muscle. In the body, IGF-1 is released in response to the presence of Human Growth Hormone (HGH). After intense resistance training, the body experiences a surge in GH and IGF, and this is one way that new muscle is built. Although GH is considered to be highly anabolic, in actuality, IGF-1 is suspected to be responsible for the primary anabolic activities of GH. IGF-1 builds new muscle tissue by promoting nitrogen retention and protein synthesis. This causes the growth of muscles through both hyperplasia (which is an increase in number of muscle cells) and mitogenesis (which is the actual growth of new muscle fibers). Thus IGF-1 not only makes muscle fibers bigger, it makes more of them as well! IGF-1s effects are not limited to building new muscle, however. It has a potent effect on lipid (fat) metabolism, and helps the body burn fat at a significantly elevated rate. In addition, IGF-1 is both a neuroprotector and neuropromotor, which improves mental functions such as reflexes, memory, and learning ability. IGF is also important for production of connective tissue and insuring proper bone density. Although IGF-1 is very potent at building muscle and burning fat, the Lr3 IGF-1 version is roughly 2-3x as powerful. Lr3IGF-1 (Long R3 Insulin-like Growth Factor-I or Long R3IGF-I) is an 83 amino acid analog of human IGF-I actually comprising the complete human IGF-1 sequence but with the substitution of an Arg for the Glu at position 3, as well as a 13 amino acid extension peptide at the N-terminus. This makes Long R3IGF-I significantly more potent (2-3x) than IGF-I in studies, because it has a lower affinity to be rendered inactive by IGF binding proteins, and consequently more potential activity in the body.

The most effective form of IGFis Long-R3 IGF-1 (IGF1-LR3).
It has a considerably longer half-life than other form, nearly 20-30 hours.

Protein creation is better along with amino acid absorption as a source of energy. It enhances use of fat as energy. In lean tissue, Long-R3 IGF-1 (IGF1-LR3) prevents insulin form carrying glucose across cell membranes, as a result, the cells have to change to burning off fat as a source of energy. Long-R3 IGF-1 (IGF1-LR3) also mimics insulin in the human body.

Do NOT follow this link or you will be banned from the site!
Close
For news and offers follow our Facebook page
CHECK OUT THE LABOR DAY SALE ITEMS!
Coronavirus and transit times