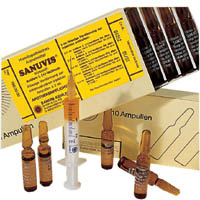 – Skin smoothing action due to its AHA properties, “chemical peeling” if used with mesotherapy

Fight problems caused by hypoxia in cells (lack of oxygen):

Lactic acid, being a product of energy production in the cell, is the central agent in the cell. If the cell is in a state of fermentation or if the metabolism is ketoazidosic, too much lactic acid of the pathogenic type forms.
The physiological form of lactic acid is L(+) lactic acid: it is optically configured to the left (L = levo) and thus twists to the right (+). The pathological form is D(- ) lactic acid: it is optically configured to the right (D = dextro) and twists to the left (-). The right-handed form arises physiologically as a product of glycosis in the working muscle (known in German as โ€meat lactic acidโ€). The left-handed form arises pathologically during the anaerobic breakdown of carbohydrates into hydroxyproprionic acid. The fermentation of the lactic acid which results under anaerobic conditions can be summarized in the following equation: C6 H12 O6 >> 2CH3-CH(OH)-COOH (glucose and lactic acid). All processes only serve to produce energy. As soon as the use of energy suddenly increases (e.g. in sport), or the supply of oxygen decreases, or here is an increase in the glucagon levels, glycolysis begins to take effect.
Glycolysis is the breakdown of glucose into lactates. The lactate can leave the cell and is transported by the bloodstream into the liver, where it is either broken down into CO2 and H2O or, if there is a surplus of energy, re-formed into glucose and then glycogen (gluconeogenesis). The left-handed lactic acid causes reactions in the bloodvessels and lymph channels with consequent slowing down of its removal and destruction of the intima.
The oxygen needed to transport the erythrocytes is insufficient. Glycosis is insufficient, and alongside the right-handed (L+) lactic acid, more and more of the pathological type is formed. This is also a reason for aching muscles being a physiological symptom of overexertion. Prahm postulates above all that the lactic acid phenomenon is a symptom of excess of acid, which itself arises when there is too much right-handed (L+) lactic acid and as such is the joint cause in acute excessive exertion (aching muscles).

Suggested protocol: 2ml to be injected I.M. one to three times a week. Also can be used IV with physiologic solutions.