Aqualyx is a revolutionary solution to lose weight in a tried and tested way. Aqualysis, the method of using the aqueous gel to remove excess fat, utilises a non surgical method to target fat cells to destroy them permanently.

Aqualyx is completely biodegradable and biocompatible, using a slow-release sugar based system, to dissolve cellulite at the site of injection before it’s passed along the body through the lymphatic and excretory system.

AQUALYX – THE AFFORDABLE ALTERNATIVE TO KYBELLA

Both can treat more or less the same indications and parts of the body that fat is hardest to remove from; both can define features such as the jawline, by removing the Double Chin. Aqualyx is similar to Kybella, where Aqualyx is a compounded solution from the Deoxycholate family and Kybella is Deoxycholic acid. The main difference is that Kybella is FDA approved. So the products appear to be country specific, where Aqualyx is less well known within the US by existing Kybella customers.

In terms of cost efficiency, Kybella is available at $1550 for 4 x 2 ml vials, compared to Aqualyx available at only $585 for 10 x 8 ml vials. An easy comparison per ml, would be $7 per ml for Aqualyx and $193 per ml for Kybella! This is a staggering $186 difference between 1 ml of each, that appears to exploit American consumers that will do anything to lose unwanted fat and achieve a contoured body shape. Many Americans, especially those that don’t use the internet to research alternative products, will only know of what their medical professional uses.

Many patients will be reluctant to try something that is not FDA approved. However, Aqualyx is used worldwide and more and more US plastic surgeons and aesthetic practitioners use Aqaulyx. So why isn’t Aqualyx FDA approved yet, you ask? The answer is simple: the tests and studies that need to take place for this are expensive and extremely rigorous.

How many vials would be sufficient per patient? Depending on the number of areas and size of areas that need to be treated, a pinch test of 1.5cm could be treated with just one 8ml vial of Aqualyx. Which is not going to be sufficiently treated by Kybella which would require another batch to be ordered. This can become quite costly.

What do I receive in the box?

What are the Benefits of Aqualyx?

Aqualyx is recommended for:

How is treatment carried out?

Only medical professionals that have received specialist training in administering Aqualyx, should treat patients with this product. Injections are usually repeated every 3 – 4 weeks and typically 2 injections at each spot during each treatment.

Along with the aging, the subcutaneous fat layer changes as the process of microcirculation and lymph drainage is disrupted. In addition to these transformations, women often face such a problem as cellulite. To effectively solve this deficiency, at any stage of its development, specialists have developed a unique tool – an injection AQUALYX, which helps to smooth out the relief of the skin and restore the basic functions of cells.

AQUALYX is an innovative lipolytic that dissolves and removes fat cells from the body, allowing you to effectively adjust body shape with just a few injections.

The main active ingredient of AQUALYX is sodium deoxycholate – a completely biocompatible salt of deoxycholic acid, which in our body is regularly produced by the liver. At a slightly lower concentration, it has been used for a long time for fat-burning mesotherapy; however, the new technique has significant differences:

If you have any questions about the procedure, ingredients of AQUALYX or shipment – specialists of EuroMex internet shop are happy to help you! We offer AQUALYX at affordable price to buy it online.

Upon contact with fat cells, the drug quickly breaks down their membranes (approximately the same effect is produced by ultrasonic liposuction – and, by the way, these techniques are often combined in one general course to enhance the result). Then the lymphatic system starts its action, which removes the fat from the body together with the resulting degradation products.

Like other lipolitics, AQUALIX is not a drug for weight loss. With its help it is impossible to get rid of extra pounds: for this diet, exercise or bariatric are much better. You can correct almost any part of the body – “the second chin”, neck, back, stomach, hips and even knees. But we strongly suggest to make all the necessary consultations and checking regarding procedure before ordering and using AQUALIX. 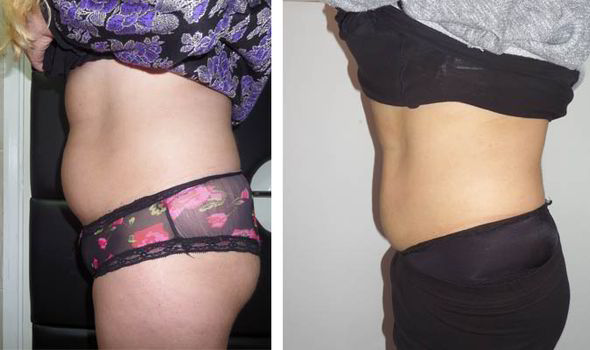 Before and after pictures, taken from this article.