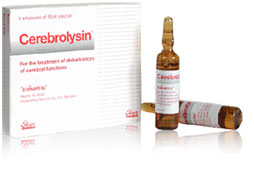 original Cerebrolysin from Ever Pharma

Unique peptidergic nootropic for the modern, safe and effective treatment of disturbed cerebral functions, metabolic disturbances and most neurodegenerative diseases. Used for over 30 years, backed by hundreds of clinical studies.

Cerebrolysin® is a peptide preparation extracted from porcine brain. The solution is ready for injection or infusion, free of proteins, lipids and antigenic properties.

Cerebrolysin is a peptide mixture obtained by standardized enzymatic (proteo)lysis breakdown of purified porcine brain proteins. It consists of approximately 25% biologically active low molecular weight peptides and amino acids that are able to penetrate the blood–brain barrier in significant amounts and mimic the effects of NGF. 1 ml of injectable solution contains 215,2 mg of protein lysate and excipients (sodium hydroxide, water).

The efficacy of Cerebrolysin® is proven in numerous animal experiments and clinical trials. Cerebrolysin® is a brain-specific peptidergic nootropic drug able to affect the central nervous system in a multimodal way. This multimodal action of Cerebrolysin® expresses itself as : 1) regulation and improvement of the neuronal metabolism which prevents lactacidoses in hypoxic or ischaemic episodes, 2) modulation of the synaptic plasticity which corresponds to an improvement of behaviour and learning capacity, and 3) a completely unique neurotrophic effect , including neuronal differentiation, guaranteeing full neuronal function and protection against different types of ischaemic and neurotoxin lesions .
In Controlled clinical trials Cerebrolysin® treatment leads to an improvement in the cognitive performance and mood of patients suffering from Alzheimer’s disease. Therefore, the amount of care needed by these sufferers decreases.
In these patients marked improvement is observed in 61.7% of the Cerebrolysin® – treated group (as assessed by the Clinical Global Impressions scale CGI ). Another clinical trial in patients with vascular dementia demonstrates enhancement of memory performance in the group receiving Cerebrolysin® treatment. An improvement in the global clinical picture is also noticed in this illness. A further study involving patients from
nine different disease entities established the effectiveness of Cerebrolysin® through the use of 11 psychological tests subjected to a variance analysis.

After stroke and craniocerebral truma treatment wit Cerebrolysin® leads to an accelerated recovery.
Literature on Cerebrolysin® is available upon request.

Cerebrolysin® passes through the blood-brain barrier . Up to eight hours after iv administration of Cerebrolysin® neurotophic activity can be detected in the human long-lasting effects even after a single iv administarion.

Cerebrolysin® is generally well tolerated and possesses an extremely high margin of safety. In human therapeutic dosages this produces almost no toxic symptoms. The toxicological data are listed below.
Acute toxicity: after a single iv administration of Cerebrolysin® the following LD50 values were observed (14 days observation period) :male rats68ml/kg body weight , female rats 74ml/kg body weight ; dogs, male and female >52.2ml/kg body weight. Chronic toxicity (multiple doses over six months) rats received up to 12.5ml/kg body weight daily for 26 weeks. Only moderate changes in the blood count were observed, dogs ; the highest administrated doses were 9ml/kg body weight daily for 28 days (about 10 times the human therapeutic dosage) and 4.5ml/kg body weight daily for 26 weeks (about five times the human therapeutic dosage): no systemic substance-dependent intolerance reactions were observed .
Reproductive toxicity: Cerebrolysin® was injected iv to the dams at the highest possible volumes: in no case was an alteration of the gestagenic period observed, in rabbits. Neither embryotoxic nor teratogenic effects nor
impairments of embryonic or neonatal developments were found; no influence on the progeny (F1 and F2 generations) was evident. Influence on the fertility and reproductive performance of the parent anilmals potential, effect or carcinogenicity in toxicological tests, neither in vitro nor in vivo.

Cerebrolysin® is generally well tolerated. If injected too fast it may cause a moderate heat sensation. In extremely rare cases a hypersensitivity reaction manifested itself as chills, headaches or as slight increase in body
temperature the cause of which is probably the hyperresponiveness of the patient. In no case to date has the undesirable effect persisted or proved threatening to the patient.
Warning and precautionary measures
Patients with severe renal impairment must be excluded from a Cerebrolysin® therapy. Animal experimental data did not show any evidence to teratogenic effects. There is no clinical experience with Cerebrolysin® in women.
Therefore, unless the potential benefits outweigh any potential risk.
Cerebrolysin® should not be administered during preguancy and the lactation period.
Interactions
The concomitant administration of Cerebrolysin® with antidepressive drugs or MAO inhibitors can lead to cumulative effects. In these cases a dose reduction of the antidepressive drug is advisable.
Dasage and administration
Cerebrolysin® is available in 1ml, 5ml and 10ml ampoules and vials of 30ml and 50ml. Up to 5ml per intramuscular administration, for administration over 5ml an intravenous injection or infusion is advised.

Cerebrolysin® can also be given diluted in a standard iv solution (eg physiological saline solution, flinger’s solution, glucose 5%, dextran 40) infused slowly over approximately 20 to 60 minutes, Once daily application of Cerebrolysin® for a minimum of 10 to 20 days are recommended. This constitutes a course of therapy. In mild cases 1-5ml, in severe cases 10-30ml should be applied. The length of the therapy and the individual doses on the age of the patient as well as on the disease. Usually a treatment period of three to four weeks is recommended. Therapy courses can be repeated several times in accordance with the clinical picture of the patient until no further improvement can be observed.
Therapy-free intervals should be maintained between courses. In severe cases it is advisable not to interrupt treatment abruptly but to continue with one injection every other day for a period of four weeks.
From the above mentioned clinical trials the following daily dosage guits can be deducted dementias 3-50ml daily, in postapplectic deficits and brain injuries 10-50ml daily.
Storage
Keep in a safe place out the reach of children. Store at room temperature not over 25°C, away from light.

Effects of Cerebrolysin® in Patients With Minimally Conscious State After Stroke: An Observational Retrospective Clinical Study

Effect of cerebrolysin on disadaptation syndrome in patients with ischemic stroke

The efficacy of cerebrolysin in the treatment of autism spectrum disorders